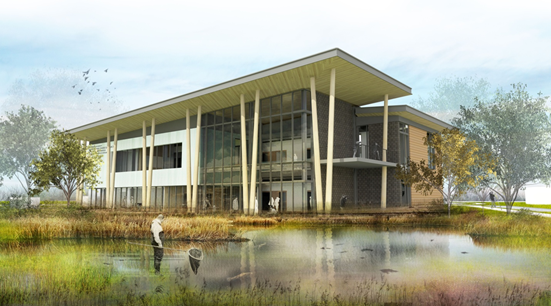 With construction starting on a new cutting-edge facility for Lake Superior State University in downtown Sault Ste. Marie, the LSSU Foundation announced this week, that it has met the goal for the ‘Fund to the Finish Line’ challenge to help fund the $14.5 million project to create the Center for Freshwater Research and Education (CFRE).

As part of the $4.2 million campaign to support LSSU’s expansion of the Aquatic Research Laboratory, the challenge was issued by Richard and Theresa Barch to match all new gifts and pledged to the project by September 30. Thanks to the generosity of many alumni and LSSU friends, the Foundation has reached the established goal to raise $500,000. Many supporters stepped up in the closing days of the challenge to take advantage of the dollar-for-dollar match.

Named in recognition of the Barch’s commitments to the project in the early phase of the campaign, the Richard and Theresa Barch Center for Freshwater Research and Education will be constructed along the shores of the St. Marys River adjacent to LSSU’s successful Atlantic salmon hatchery. CFRE will be training the next generation of scientists, educators, and citizens that will be stewards of our water resources and of the science that conserves it. It will house the Dr. Constance Baker Great Lakes Discovery Center, which will include interactive exhibits on Great Lakes science that is open and free to the public and will engage children of all ages, as well as showcase LSSU fisheries programs to thousands of visitors annually. The center will also house state-of-the-art laboratories that will allow students to work one-on-one with scientists and in K-12 classrooms, applying their knowledge to solving real-world problems that enable us to be leaders in fisheries management and conservation.

“We are extremely grateful to Dick and Theresa Barch for their extraordinary gifts to LSSU, and for encouraging others to support the CFRE campaign with this initiative,” said Thomas Coates, executive director of the LSSU Foundation. “Many supporters were encouraged by the Barch’s generosity and accepted the challenge to take advantage of the dollar-for-dollar match. We’re proud of our success and want to thank the Barches for their outstanding support of this asset for the university, the community, and the Great Lakes.”

The fundraising campaign for CFRE will continue as the Foundation finishes the final fundraising to reach its goal. With slightly more than $100,000 remaining to be secured, participation is welcome, and naming opportunities are still available, including the popular “Fund a Fish” opportunity to personalize a fish that will swim in the virtual fish tank in the new building.

“This is a very exciting time for all of us at Lake Superior State University,” said Dr. Rodney Hanley, LSSU President. “After many years of planning how best to expand the science opportunities for our students, provide leadership through research, and create interactive exhibits on Great Lakes science that are for everyone, we’re pleased that this project is boldly moving forward. CFRE will be helping to keep the Great Lakes great. I want to thank the University leadership for their guidance, and especially the Board of Trustees, for their 100% participation in this campaign.”

The LSSU Foundation launched the CFRE Campaign to fund LSSU’s share of the state-supported $14.5 million project, in March 2017. The Center naming, in honor of Richard and Theresa Barch, was announced in December 2017.

For more information about the campaign or the CFRE project, contact the LSSU Foundation at 906-635-2725 or visit online at foundation.LSSU.edu/cfre/

The Mystical Arts of Tibet