“Old Mission Bank is such an important economic driver and leader in our community. We are so grateful for their support of this top priority project at Lake State,” said LSSU Foundation Executive Director Tom Coates. “Their generosity has served as motivation 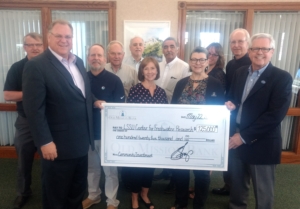 for others to make a commitment to our capital campaign.”

The Center for Freshwater Research and Education will be located on the St. Marys River in Sault Ste. Marie, Mich. As the hub of aquatic freshwater research, this state-of-the-art facility will provide educational opportunities and economic development for the Eastern Upper Peninsula and surrounding region.

“As a locally-owned community bank it is vital that we support projects such as these that provide growth, opportunity, and long term positive impact to our community and the Eastern Upper Peninsula,” stated President and CEO of Old Mission Bank, Gary Sharp. “We believe the CFRE’s location on our city’s waterfront combined with the educational opportunities it will provide to LSSU and local students is going to make it a unique destination for researchers, tourists, and community members resulting in increased local economic impact related to these activities.”

Initially, the project was estimated to cost $12 million, where LSSU would be required to raise 25% of the funds and the State would cover the remaining amount for constructed-related costs. Outstanding progress has been made toward the initial campaign goal of $3 million.

After extensive design work and planning, the project cost for CFRE was determined to be $1.2 million more than the projected initial costs, bringing the total cost to $13.2 million. The additional $1.2 million will be raised by LSSU to meet the expected educational and research goals outlined for the CFRE. To date, funds raised for the CFRE total $11.92 million or 90% of the revised campaign goal, thanks to contributions from Old Mission Bank and other generous donors.

Old Mission Bank is the operating entity of Old Mission Bancorp, Inc., a locally-owned and controlled single bank holding company, formed in 1999 by twelve local incorporators, eleven of whom continue to serve as Directors of the bank and its holding company. The bank operates a main office in Sault Ste. Marie, Mich., and a branch office in Pickford, Mich.

Lake Superior State University teams up with U of M, area tribal groups for...